HOTEL FF&E VENDOR
While the COVID-19 pandemic deeply affected the hotel sector in 2020, causing a plunge in occupancy and financial performance, it has not prevented world leaders from continuing to develop their room inventories. However, development trends vary among global champions, leading to several changes in the Top 10.

2020 has brought its share of upheaval to the hospitality industry, but not to the top of the group rankings: the undisputed global number one remains Marriott International. The American champion, which recently lost its iconic CEO Arne Sorenson, has seen its growth slow down slightly compared to the previous year (almost +5%), but posted a solid performance with a 3.1% increase in its number of rooms, now above 1.4 million.

Behind it, however, the ranking is changing. OYO, the Indian start-up that had burst onto the ranking of the main operators in just a few years, marked a pause in its development and scaled back in 2020, allowing its more traditional pursuers to regain a rank.

The Chinese company Jin Jiang, known in Europe through Louvre Hotels and Radisson Hotel Group - acquired in 2015 and 2019, respectively - is now back to being the world’s number two. In a context where China’s hotel market is recovering faster than its Western peers, the company has achieved a higher rate of growth (+6.7%) than its Western rivals. 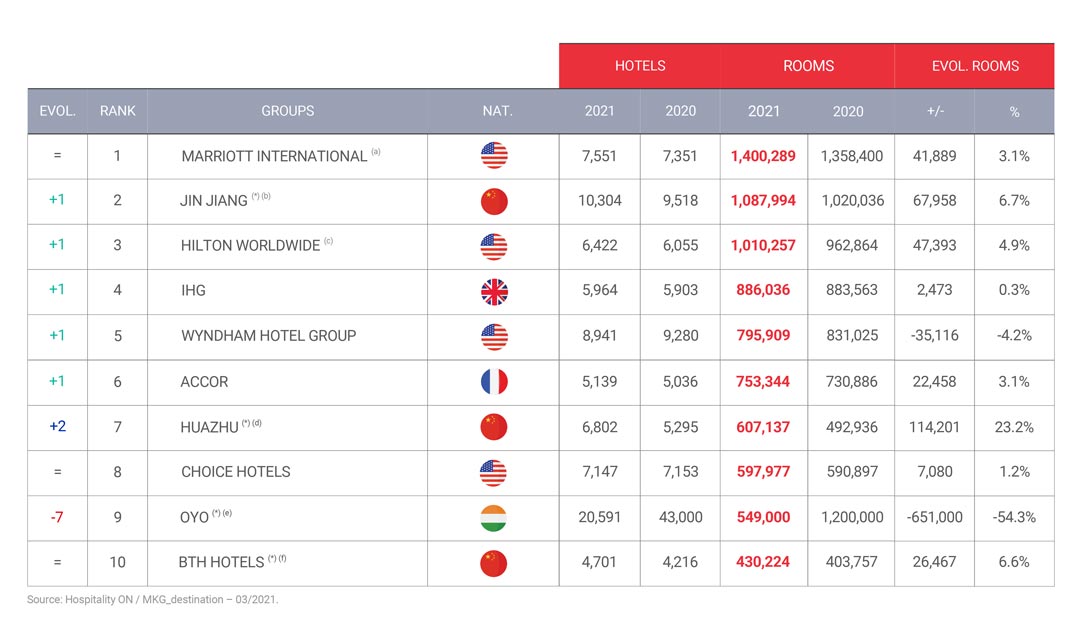 Hilton, which climbed to number three, recorded the best growth among Western groups: +4.9%, a net gain of more than +47,000 rooms; higher than that of its rival Marriott. It also crossed the highly symbolic 1-million room threshold. Together with Marriott and Jin Jiang, it is now part of the Top 3 club of groups that have achieved this key milestone.

Behind it, IHG regained one place and became No. 4 worldwide, even though its supply stabilized (+0.3%) after a rapid development spur (+5.4% in 2019). While the group has continued to grow, it has suffered from the strategy of some of its real estate partners.

This is the case, for example, of Service Properties Trust, which has chosen to build its own platform dedicated to hotel operations, enabling the Sonesta group (34% owned by SPT) to build up in a couple of months a strong portfolio of more than 100,000 rooms in operation under its brands.

This desire for independence of some owners, key partners for the groups, has also affected Wyndham, which recorded the only annual decline in its room supply (-4.2%) in the world’s Top 5.

The French champion recently cashed in and reduced its stake in another Chinese group, Huazhu, which recorded the strongest growth in the Top 10: +23%. It delivered both very strong organic growth in China, where the economic impact of the pandemic has faded much faster than elsewhere, and it fi nalized the integration of German company Deutsche Hospitality (Steigenberger, Intercity, Maxx, Jaz in the City, Zleep...), whose acquisition Huazhu had announced at the end of 2019.

This gives it a direct foothold in Europe, a market dominated by its equity partner Accor, which stands just above Huazhu, now the 7th largest hotel group in the world. Most importantly, Huazhu delivered remarkable growth, with an annual gain of more than +100,000 net rooms for the second year in a row.

Huazhu also overtakes the American Choice Hotels, which nevertheless grew by 1.2% and is now closing in on the 600,000 room threshold.

Behind him stands the Indian troublemaker OYO, who had disrupted the world ranking in a few years but has suffered a sharp decline this year, losing more than half of its rooms in operation and falling to the 9th place of the ranking.

However, there are several underlying dynamics, as more than 80% of its decline is explained by its losses in China, where the group that had risen to the rank of leaders saw the wall rebuilt, while in other world markets its decline was contained. It even continued to grow in certain Asian markets outside China (Thailand, Indonesia, the Philippines, Japan...), while its hotel supply declined signifi cantly in Europe, where the group is focusing on vacation rentals through recent acquisitions.

Closing the Top 10 stands a 3rd Chinese group, BTH Hotels, whose ranking remains unchanged. However, it embarks on a stronger development dynamic, with an approximately 6.6% increase in its room supply over the year.

(a) excluding timeshares, excluding Design Hotels units distributed but not integrated into the group

(b) Excluding single distribution/affi liated rooms [=Hotels &Préférences, Tempting Places], WITH Radisson Hotel Group. For the supply in China, MKG estimate based on actual Q3 2020 vs 31.12.2019, for the rest of the world: definitive data as of 1/1/2021)

(e) MKG estimate based on an inventory of active hotels on the platform - for the hotel supply only, excluding Oyo vacation homes / formerly @Leisure Group, Belvilla, Ferienwohnungen
​