HOTEL FF&E VENDOR
​The Portrait Milano debuts December 1 in the heart of Milan’s fashion district. The location makes sense, given that the 73-room property belongs to the Lungarno Collection — a group of Italian boutique hotels founded by the family of Italian loafer king, Salvatore Ferragamo.

“The real city center is the fashion district where we are now — one of the most expensive real estate areas in Europe,” said Lungarno’s CEO Valeriano Antonioli. Just one other luxury hotel, Four Seasons Milan, is in this district, and Antonioli aims to capitalize on that exclusivity.

Yet despite the group’s heritage, it doesn’t call Portrait Milano a Ferragamo brand extension.
​“We think it’s very difficult to use a hotel to be the direct extension of a fashion brand,” said Antonioli. “Fashion is very volatile. If you want to be truly into fashion, you have to change your shoes or your clothes every six months, but in the hotel world, you have to keep the curtains for 20 years.” 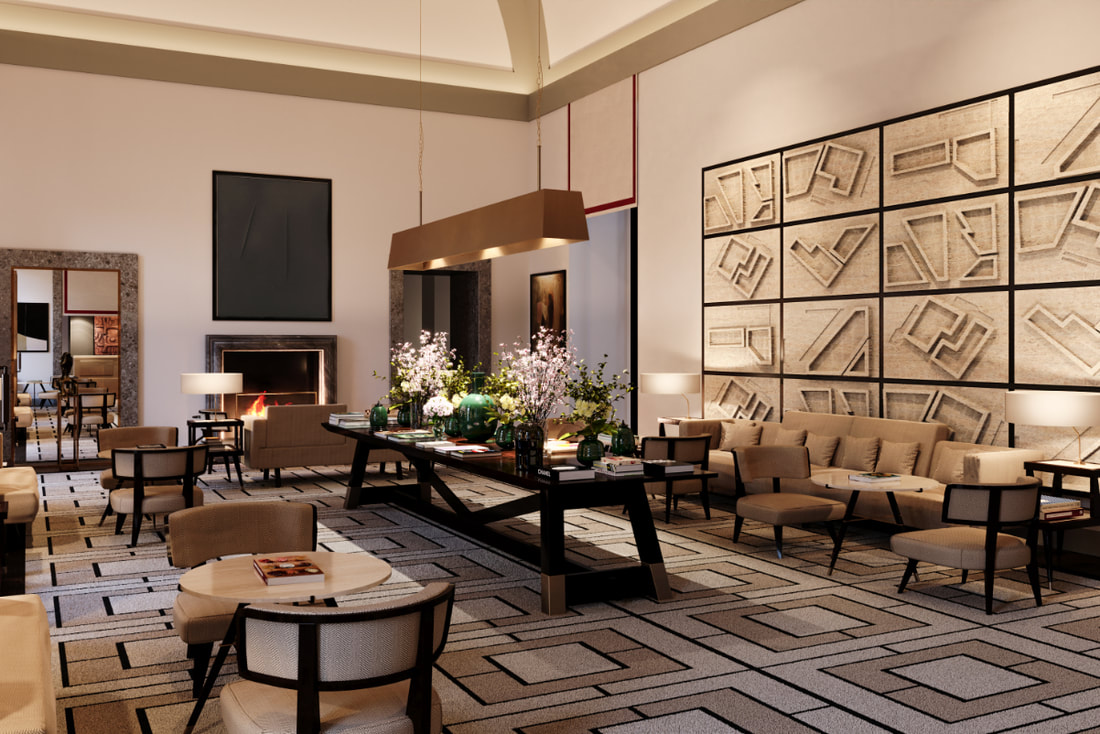 While other luxury brands, such as Bulgari and Armani, use their brands front-and-center in their hotels, the Ferragamo family has taken a different tack. First, it went with Lungarno, the name of its first property in Florence. The name translates to “going along the river Arno.”

Next, with its Portrait brand of hotels, the group is playing the long game — capitalizing on the shoemaker’s renown and interpreting its style without pushing it.

“So far, no one in fashion has succeeded [as a direct brand extension] in the hotel world,” Antonioli said.

That statement will come as news to Bulgari, which intends — through a Marriott partnership — to double its footprint of luxury hotels to a dozen by 2026 and which explicitly ties in its eponymous jewelry brand through design details. Giorgio Armani said this year it plans to expand its hotels to Saudi Arabia. This year Elle Magazine announced its first hotels.

Yet Salvatore Ferragamo’s point of view is an interesting one to try on for size, and it echoes what LVMH has done with the Cheval Blanc brand of hotels inspired by the famous winemaker. Lungarno believes Ferragamo’s imprint should be subtle. The concept of the Portrait brand, for instance, is to create “ultra-tailored hospitality.”

The company has translated “tailoring” into highly personalized service rather than a lot of product placement. Ferragamo’s time in Florence — when the shoe designer would host celebrities while he made their footwear — inspired the concept.

“Our front-of-house team asks why you came to Milano,” Antonioli said. “We’ll find out if you’re interested in art, architecture, fashion, or design, and we’ll help you design your vacation in this personal way.”
​Another possible distinctive advantage for the hotel is its ample event space in Milan, a city that adores seeing and being seen. Portrait Milano is inside a former seminary dating from 1564 that its latest owner has lavishly restored. The property includes a piazza, which may attract the neighborhood’s fashion set for events and parties.

“We always hoped it would become the ‘piazza of the fashion district,’” said Antonioli. “We’ve already hosted a fashion show and a display for the furniture fair, so we are on our way.”

While the Lungarno Collection now has three hotels under the Portrait series — Milan, Florence, and Rome — Antonioli has a soft spot for this latest launch.

“For me, it’s a personal baby because we’ve been working on this project since 2013,” he said.

Closing down the construction site during the pandemic was a huge undertaking — from a legal and financial standpoint for the company — as was starting it back up again one year later.

So, what’s next? Antonioli is scouting locations for the next Portrait.

“The limits of Portrait are that the location has to be within walking distance to reach many attractions of a city,” Antonioli said. “The center of the city is what makes it a Portrait.”

Yet he wants the brand to keep a connection to its fashion and Italian roots.

“The DNA is Italian — to grow up with a sense of beauty is innate, and you get a sense of enjoying life here,” said Antonioli.