HOTEL FF&E VENDOR
When planning a guestroom, space is obviously of paramount importance but comfort and style are also key factors, causing designers to choose specific furnishings for their projects.

Furniture with its “own attitude and style” is important to Andrea Dawson Sheehan, principal of the Seattle-based Dawson Design Associates, when she is planning hotel interiors. “We try to find pieces that fit the personality of the hotel,” Sheehan said.

“There has been a shift away from the traditional sofa, bed, night stand, desk package,” she added.

Several different types of furniture and seating contribute to the comfort of the guestroom, Smith noted, and are included in his plans when designing a room.

“Sleeper sofas are important, we do very few guestrooms that just have a sofa, but it’s important to have the right type. American Leather has a great sleeper sofa that folds out quite nicely and doesn’t have a bar down the middle so it’s really comfortable,” Smith said.

Ergonomic chairs are likewise widely used these days. “They have to do with comfort. Everyone is using them for the desk chair and it’s especially important for any hotel with business travelers,” he said.

Agreeing that a comfortable, stylish desk chair is important, Sheehan said, “we have used a lot of office manufacturers, Davis has beautiful desk chairs. Often we’ll go to some of the more corporate lines, they are stylish and more contemporary,” she said.

“When it comes to lounge chairs, we choose it for shape and for scale because you’re dealing with a box, a 13 by 30-foot room,” Sheehan continued. “We go to a smaller scale, a higher back for comfort, and some type of design element.”

Smith likes “nice, cushy lounge chairs,” noting “we use all types, with wood frames and without, and we’re using them as a feature element. You don’t want to put the lounge chair in the corner because the beds are so white they’re not as big a factor as they once were,” he said.

Ottomans are also popular with the designers. “Ottomans are a great way to create a design statement and there are all kinds— wood, upholstered, carved. It’s an opportunity to add energy and personality to the room,” Sheehan said.

Smith prefers ottomans on wheels so they can be moved around the room. “The ottoman is not just a place to put your feet anymore. It can be used as seating and quite often with a single traveler, it’s used as a dining table,” he said. 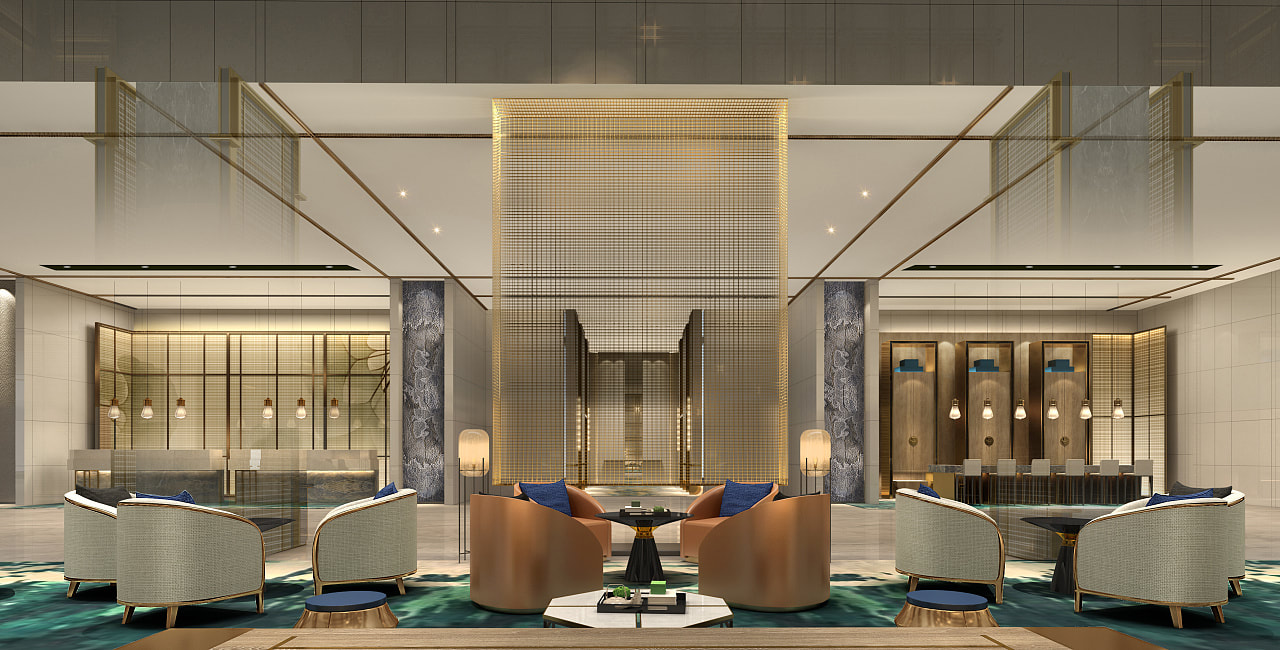 Not surprisingly, manufacturers report there is a big demand for ottomans. Large ottomans that function as coffee tables are popular, noted Leo Vogel, senior vp, sales and marketing, for American of Martinsville of Martinsville, VA.

“Furnishings in the hospitality industry generally reflect the trends of home furnishings,” Vogel said. “People want to take the comforts and conveniences of home with them when they travel. As a result, today’s travelers expect attractive furniture, wireless Internet, high-definition television and user-friendly workplaces both within their rooms and in hotel lobbies,” he said.

Charles Monaco, design director of Huntington, NY-based Furniture Design Studios, noted that while the residential trend is still popular, the color and styles are shifting a bit. “We are seeing a shift away from the cherry and mahogany tones. Wenge, walnut and ebony with brown tones have become the new trends in colors,” he said.

Bench seating has also become more prevalent in guestrooms, Smith noted, saying, “Benches are a great element. It’s hard to get extra seating in the room and it’s so important.”

Custom designs are also high in demand, according to Monaco. “Around 85% of our projects are designed specifically for a particular property,” he said. “From the midscale to the high-end properties, everyone wants a signature look.”

Bench seating has become more prevalent in guestrooms, Smith noted. “Benches are a really great element. It’s hard to get extra seating in the room and it’s so important. We’re doing a lot of bench seating at the foot of beds but it can be used in different areas if there is space,” he said.

Art is also receiving greater emphasis, according to Sheehan. “We’re seeing more in the way of art with a move away from the traditional three-piece package with it over the beds and desk. We’re using a larger scale, gallery-type look. It makes the room more dramatic and reflects the attitude and location of the hotel,” she said.

As for furnishings that are being used less these days, Smith named side chairs. “You don’t see as many side chairs next to desks— five years ago you would see a chair off to the side of the desk— but now that space is being used for other things,” he said.

Large armoires for televisions are also less popular with the advent of HDTVs, Vogel noted.

Outside the guestroom, manufacturers reported a number of trends in furniture and seating.

“On the banquet side, we see a lot of emphasis on backs that adjust to the user’s back, a flexback design,” said Roger Gasser, marketing development manager for Gasser Chair Co. of Youngstown, OH.

“We also seem to get a lot of requests for stackability,” Gasser said.

Banquet chairs that look like dining chairs yet stack are hot these days, according to David Cline, president of the San Rafael, CA-based Global Allies. Conversely, “a stacking chair that needs a slip cover to look good” is not in favor, he indicted.

“Sleek well designed task chairs” are also big, Cline said. “The desk chair is no longer an upholstered dining chair or simply an upholstered chair with a swivel base,” he noted.

Because of the concern for quality and durability, there has been a move away from imported goods, according to Tom Southwell, vp, sales and partner at Grand Rapids Chair Co. in Michigan.

In the chair category, he noted the popularity of “formed plywood shelf seating, contemporary design, softer seating and more upholstery. In tables, it’s bamboo edge and linoleum inlays,” he said.

Sustainable products have taken hold “across the board,” Southwell added.

“Many hotel and resort managers are currently looking for ways to be more ‘green’ and this will become even more of a concern in the future,” Vogel said.

“Coincidentally, green solutions also end up saving managers more ‘green’— money— in the long run,” he continued. “For example, managers help the environment as well as their wallets by furnishing their rooms with durable, versatile pieces that endure high-traffic environments and outlast changes in fashion. Long-lasting furniture helps hotels minimize waste and the cost of replacements,” he said.
Because it regenerates quickly, bamboo is being used more in office furniture “so hospitality furniture may also begin incorporating this eco-friendly material soon,” Vogel said.

For Monaco, sustainability is a bit of a double-edged sword. “The sustainability movement has certainly increased the cost of materials,” he said. “But it has actually reduced the amount of unconcerned vendors that continued to use raw materials that are harmful to the environment and prevented them from continuing to be under-priced and dumping product into the market.”