HOTEL FF&E VENDOR
High humidity levels and food presence are also some of the constituents of ant infestation. However, keeping your hotel clean might not be enough. In this case, you would require specific methods on how to eliminate such pests. In getting rid of ants, one must have a strong awareness of how to deal with this problem in the first place.
​
By doing so, they could effectively eradicate the presence of ants. These are some of the most efficient ways on how to get rid of ants in hotel rooms. 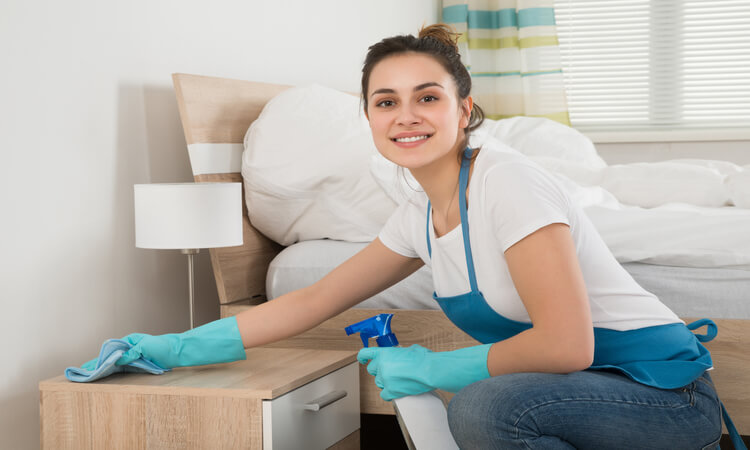 Use of Bait Traps

Bait traps for ants are one of the most efficient ways of getting rid of these pesky pests. The use of carb-based and protein-based bait traps are proven to be effective. However, some people even combine it for faster results and higher efficiency. It effectively kills visible and non-visible ants.

To get optimum results, you must place it near drains, cabinets, and under the bed bunks but not directly on the ant’s trail. It would help if you also replaced it from time to time for a higher chance and more effective ant elimination.

Using ant sprays in hotel rooms is one of the fastest solutions in killing and eradicating ants. The chemicals that compose this product are highly effective and intoxicating to ants, making it one of the most rapid insect extermination methods.

Ant sprays usually come with a straw applicator for a more convenient and more direct application. Apply it on crevices and cracks of the hotel room. Despite its instantaneous effect on eliminating ants, it still requires frequent re-treatment to eliminate the ant infestation in your hotel room entirely.

If you are pondering how to get rid of ants in a hotel room, this option might be suitable for you. Borax, which is scientifically known as Sodium Tetraborate, is a powdery white mineral that effectively serves various functions as a cleaning agent and an exterminating product for insects.

It has proven its effectiveness for several decades already. Most households and other forms of buildings use this type of method in eliminating ants, only due to its guaranteed effectiveness for a long time. Aside from that, it does not have any complicated application. You have to sprinkle Borax into areas where you wish to eliminate the ant infestation.

Natural Ways of Getting Rid of Ants

If the use of chemicals and other intoxicating elements for ant extermination sounds too dangerous for you, it would be best to consider some natural methods. The use of organic materials for elimination is a creative way of utilizing the options that nature offers. The use of these methods is also safer compared to non-organic ones.

Check out some of the natural techniques on how to get rid of ants in hotel rooms.

The use of Cinnamon Oil is an effective method in repelling ants. Applying cinnamon oil with the help of a cotton swab on the hotel room’s windows, doors, and floors could effectively get rid of such insects. You must ensure that you applied it to the ants’ trails or paths. With the right application, you would know how to get rid of ants in hotel rooms.

Some people mix the cinnamon oil with water for a more effective spray. Making a solution out of cinnamon oil and water is an effective and safer way to eradicate ants. This method is useful since the scent of the cinnamon suffocates and kills ants. With this type of solution, you could benefit from an ant-free hotel room where a pleasing cinnamon scent lingers.

You don’t necessarily have to toss away the coffee grounds from your morning coffee since coffee granules are one of the most efficient ways on how to get rid of ants in hotel rooms. The smell of brewed coffee grounds strongly repulses ants. With this technique, you no longer have to worry about the dangers of insecticide sprays. Aside from that, this cheap method saves you from purchasing expensive ant sprays in the market.

The application for this method is easier than you imagine. Just spread the used coffee grounds around the areas where ant infestations are usually present. Apply it right in the cracks of the hotel room. Aside from that, you could also sprinkle it in the indoor plants of the room. With this method, you could promote a greener method of ant elimination.

If you wish for a faster and stronger effect with coffee grounds, you can also mix it with your choice’s essential oil. Combining coffee grounds and essential oils would swiftly help in making ants suffocated. To fully utilize its effect, spread it on areas prone to ants such as garbage cans and hotel windows.

There are various methods on how to get rid of ants in a hotel room. However, you must carefully think of the most appropriate way that would best suit your preference. Keep in mind that organic and non-organic methods have varying effects during ant elimination. Some might be more effective than others yet pose more risks in terms of guest exposure. On the other hand, some methods might be a safer alternative than others but show lesser efficiency in eliminating ants.

If you have difficulty deciding on the best option on how to get rid of ants in hotel rooms, it would be best to consult skilled pest professionals to ensure that you get year-round protection of problems. In this way, you could save your hotel’s reputation by having ant-free rooms on every floor.