HOTEL FF&E VENDOR
Analysis of the current development status and future development direction of China's e-sports hotel industry in 2020: the number of e-sports hotels exceeds 2,600
E-sports hotel is a product of Internet bar + hotel based on e-sports. It combines the advantages of both, and at the same time, it is a new hotel format that is formed when other formats are continuously absorbed and accepted.

Data from the "Market Operation Management and Investment Prospect Forecast Report for China's E-sports Hotel Industry for 2021-2027" released by Zhiyan Consulting shows that: E-sports hotels are a new type of hotel that relies on e-sports games. Customers can not only enjoy the high-quality gaming experience comparable to Internet cafes, but also have the comfortable experience of staying in a hotel.  E-sports hotels provide consumers with choices such as two-person, three-person, four-person, five-person, and six-person rooms.Different from ordinary hotels, customers under the age of 18 cannot check in due to the services of e-sports games provided by e-sports hotels.​ Staying in an e-sports hotel, the longest living time can reach 38 hours, which is higher than the 30 hours of ordinary hotels. 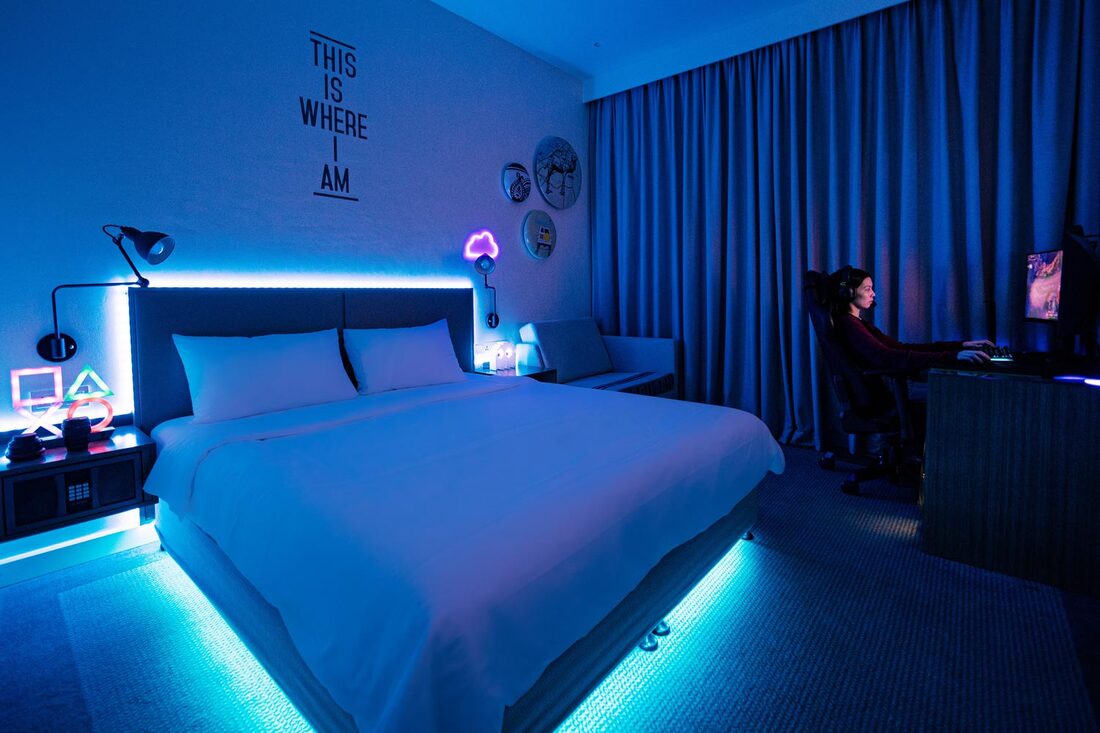 The current development status of e-sports hotels
With the advent of the Internet era, the Internet of Things era, and the information explosion era, games have become a good way for ordinary people to relieve stress after work, especially for today's young people.In recent years, relevant Chinese government agencies have issued a series of policies to effectively support the development of the e-sports industry. Therefore, China's e-sports industry is growing rapidly.Therefore, China's e-sports industry is growing rapidly. In 2020, the actual sales revenue of China's e-sports game market reached 136.557 billion RMB, an increase of 41.83 billion RMB from 2018, a year-on-year increase of 44.16%, accounting for 67.60% of the total revenue of the game industry.
​
In recent years, as e-sports has been officially incorporated into sports by the State Sports General Administration of China, the e-sports industry has entered a period of rapid development. Following this, a new format of "e-sports hotel" is slowly emerging in China,and ​E-sports hotels have appeared in Zhengzhou, Wuhan, Xi'an and other cities. E-sports hotel is more like a cross-border derivative product of Internet cafes and hotels. Its facilities are better than traditional Internet cafes, and the environment is more elegant and comfortable.At the same time, compared with traditional hotels, it is more entertaining and social, and has gradually become a new entertainment and leisure place. As of December 2019, the number of e-sports hotels in China has exceeded 2,600, with more than 190,000 terminal devices and operating income of 5.45 billion RMB.
​
In 2019, China’s e-sports hotels developed the fastest in these cities, including Xi’an, Zhengzhou, Wuhan, Chengdu, Hefei, Hohhot, Taiyuan, Chongqing, Changchun and Changsha. Among them, the cities with the largest number of e-sports hotels are Xi’an and Zhengzhou, both of which surpassed 300 e-sports hotels.
​
In 2019, the average price of staying in e-sports hotels is around 330 RMB in these cities, including Xi'an, Zhengzhou, Wuhan, Chengdu, Hefei, Hohhot, Taiyuan, Chongqing, Changchun and Changsha. Wuhan is the most expensive city for e-sports hotels, with an average price of 404 RMB; Chengdu’s average price is 399 RMB; Xi’an’s average price is 348 RMB; Zhengzhou’s average price is 324 RMB; Hefei’s average price is 279 RMB; Hohhot’s average price is 247 RMB.
​
The cost of investing in an e-sports hotel
With the transformation of e-sports theme hotels from version 1.0 to version 2.0, industry competition has become more intense, and the investment requirements for funds, talents, and services are also higher. The average investment for each e-sports hotel is about 3 million RMB, or even more than 10 million RMB. The decoration level of current mainstream e-sports hotels is further improved, presenting professional scene-style design and decoration, and the scale of single e-sports hotels is also constantly expanding.In November 2019, the largest domestic e-sports hotel opened in Guizhou. The hotel covers e-sports cultural exchange area, e-sports competition center, e-sports training room, VR experience center, multi-functional banquet hall, e-sports theme rooms, dining and entertainment and other e-sports ecological modules.In terms of investment volume, the hotel is equivalent to a boutique hotel or a four-star hotel, which is a theme upgrade of a traditional hotel. E-sports hotel has entered a new level of high-end, high-quality, large-scale guest rooms, and star-level intelligent complex hotel from the initial small scale of about a dozen rooms. Secondly, the development of e-sports hotel chains has entered a rapid period, and leading brands have begun to appear.

The future development direction of e-sports hotels
​In the future, brand personalization, space diversification, sensory enjoyment, and virtual reality will be the development direction of China's e-sports hotel industry in the future.
​
If you plan to invest in an e-sports hotel in the future and look a hotel furniture supplier to decorate your hotel, Bestar Hospitality will be your good choice which is a top 20 hospitality furniture manufacturer in China has completed a lot of high-end hotel furniture ​projects from home and abroad.