HOTEL FF&E VENDOR
Wave of High-Priced Transactions Boosts Attractiveness of Construction Financing
While lending for new U.S. hotel development lags behind loans for transactions and refinancing deals, the segment is making its return.

Sources of capital have been wary of investing in new hotel openings given that demand for hotels has been uneven across the U.S. and can falter with surges in COVID-19 cases, but the hotel industry has been on steadier footing since vaccinations became widely available.

The good news is there is substantially more liquidity today than there has been since the pandemic started, said Daniel MacDonnell, managing director for HVS Capital Markets.

Lenders continue to be selective in what deals they finance, however. They are looking for more ideal situations, such as markets with high leisure-transient demand with a drive-to component.

While lenders are careful about the deals they pick, some of the recent hotel transactions have driven up the volume of new-construction projects, MacDonnell said. The number of deals has increased, along with the price for many of these deals, particularly for resorts, with prices exceeding $1 million per room on a more regular basis.

“That’s really supporting more development, even while all the [development] costs have gone up,” MacDonnell said. “Labor, obviously, is a little bit short. The supplies have gone up [in price]. It takes a little longer to get through planning departments. But that being said, the tailwind has been where transaction volume and then the recovery has been in some of these markets.”

When the coronavirus pandemic reached the U.S., Hall Structured Finance paused its lending for new hotel development. The company started its lending for hotel construction projects in mid to late 2020 once it determined its portfolio was healthy and could add on new projects, Vice President Brad Ferguson said.

Hall has been pursuing non-recourse loans ranging from $15 million to $100 million in size in all 50 states, he said. It’s one of the few lenders out there willing to offer loans at high leverage points for new projects, up to 75% loan to cost, he said. It does require a completion guarantee from the key principles in the sponsorship group.

“We’re looking to do roughly $700 million in new-construction projects next year,” he said. 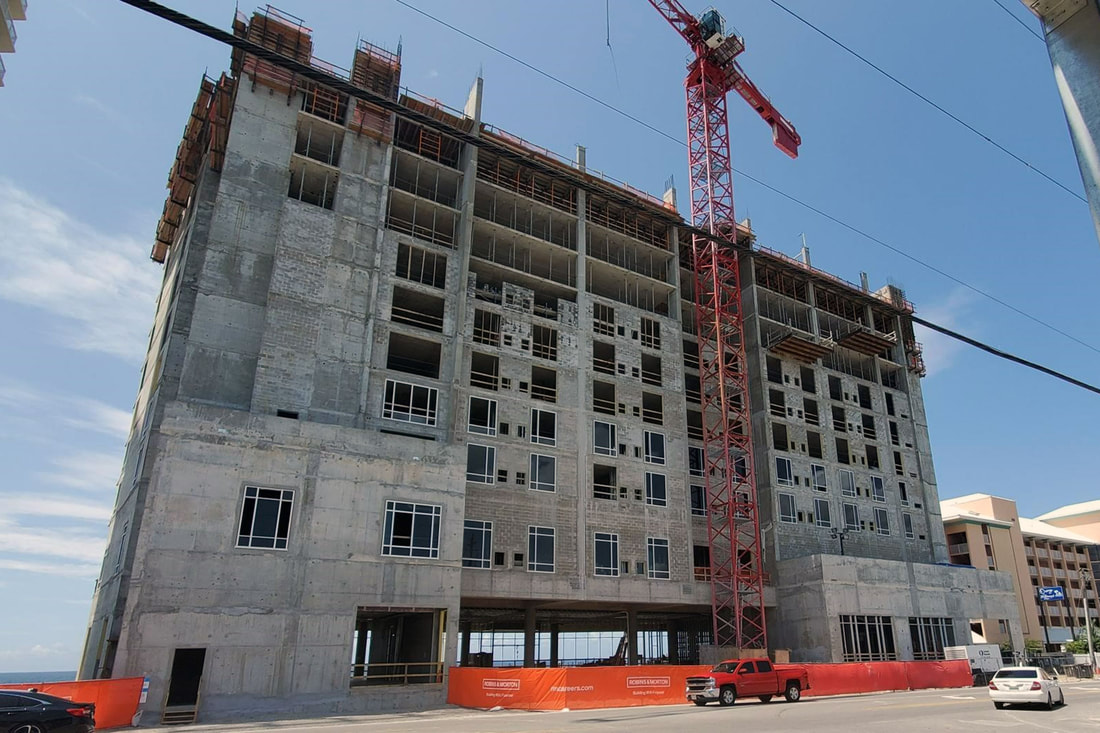 There has been more capital availability from banks, which had been tied up with forbearances and debt restructures that limit their liquidity, MacDonnell said. They tend to go with borrowers they have a preexisting relationship with.

Banks likely go with pricing in the 300 to 400 basis points over LIBOR range, but that’s dependent upon the sponsor, the recourse, and the relationship between the bank and sponsor, he said. The loans are usually in the 50% to 65% loan-to-cost range depending on the recourse. For non-recourse lenders, the loan-to-cost is about 50%. Going higher in the loan-to-cost range typically requires some type of recourse, which could be having it burn off in performance or a step-down.

Most of the hotels being developed are select-service or extended-stay properties, MacDonnell said. It’s difficult for hotel development in central business districts until business travel, group and convention business returns.

Many banks are taking a conservative approach to hotels but many are not lending at all, Ferguson said. They’re probably more comfortable working with their existing portfolio at the moment and will reenter the market once conditions improve, he said.

This creates an opportunity for lenders like Hall Structured Finance to fill the void in the market, he said. The volume it’s found has been consistent, and it has closed on several deals this year, including the Benson Hotel in Portland, Oregon, and a dual-branded SpringHill Suites and Element by Westin in Colorado Springs. It also has several projects in its pipeline currently.

The company has been comfortable being an active lender for hotel projects because of it’s long-term vision for hotels, Ferguson said.

“Hotels will come back,” he said. “The whole market will come back eventually. We think over the long haul, we have a real positive outlook on the hotel industry as a whole.”

OTO Development’s new-development pipeline is smaller than before the pandemic began, said Corry Oakes, CEO and founder of OTO Development, via email. The company has two new-build projects currently under construction: an AC Hotel in downtown Bethesda, Maryland, and the Hyatt Place Panama City Beach-Beachfront in Florida. It will start two more projects over the next few months.

From an industrywide perspective, securing financing for new development remains a challenge because banks and lenders are dealing with legacy issues, he said. Many hotels financed prior to the pandemic face ongoing stress, including covenant challenges. As the loans reach maturity, the hotels will need new equity. On top of that, owners used up their FF&E (furniture, fixtures and equipment) reserves to pay debt services instead of saving them for maintaining their hotels, creating an additional capital requirement.

“Many banks want their existing loans on more stable footing before they deploy capital toward new deals,” he said. “On the flip side, banks have several trillion dollars more in deposits with little growth in loan volume. They need to grow their loan book.”
​
Lending Preferences

In a perfect world, lenders are looking for deals in markets with high transient leisure demand with a drive-to component, MacDonnell said. They want hotel development in a market with high barriers to entry with a strong brand and a strong developer. If the project is an independent property, lenders want a strong developer who can demonstrate they understand the product and can deliver the performance.

Not much has changed from an underwriting perspective, Ferguson said. The company may be more favorable to select-service hotel projects as opposed to full-service.

“That’s not to say we wouldn’t pursue a full-service hotel,” he said. "We're just maybe a little more conservative on full service at the moment."

In securing a loan, sponsorship and deal specifics have never been more important, Oakes said. Sponsors that have been great partners with their lenders and have a history of developing the right product at the right basis at the right time in the right market in the right location will have options for capital.

“All of those various deal aspects are always important, but smart capital is hyper-focused on each of them today,” he said. “Deals that don’t tick all those boxes should have a very difficult time attracting capital in this market.”
​
Looking Ahead

The 2020 new deals volume was low, but now that the industry is recovering from the pandemic, the volume has picked up, Ferguson said. Hall Structured Finance is seeing owners and developers who had hotels in the planning stage prior to the pandemic coming off the sidelines.

“I think they see some light in the tunnel of COVID,” he said.

There was an elevated level of construction lending in 2019, Ferguson said. The company is not back to that point yet, but it should approach that level by next year or the year after.

The increase in construction costs along with the measured return of hotel performance that will take time to return to pre-pandemic levels means it will be years before hotel development returns to “those lofty highs” with the numbers of openings reaching 2018 and 2019 levels, Oakes said.

Even after the pandemic ends, sponsorship and deal specifics will remain “incredibly important” in securing financing, he said.

The pandemic has added another variable to the risk matrix, MacDonnell said. Lenders will focus on projects that have a good segmentation mix and aren’t completely reliant on one segment, such as convention-based travel, that could dissipate quickly without another to pick up the slack.

“There is going to be some level of caution relative to heavily group-oriented developments, certainly for the near [term], midterm until that market case gets sorted out,” he said.

In certain instances, there will be a high requirement for public/private partnerships, MacDonnell said. HVS has already worked on multiple deals for this financing to be provided by municipalities through transient occupancy tax rebates or tax increment financing.

Hotel rooms are necessary to be competitive in the convention business, he said. If it’s difficult to get construction financing because of the pandemic, the private/public partnerships are going to become more of a component.
​