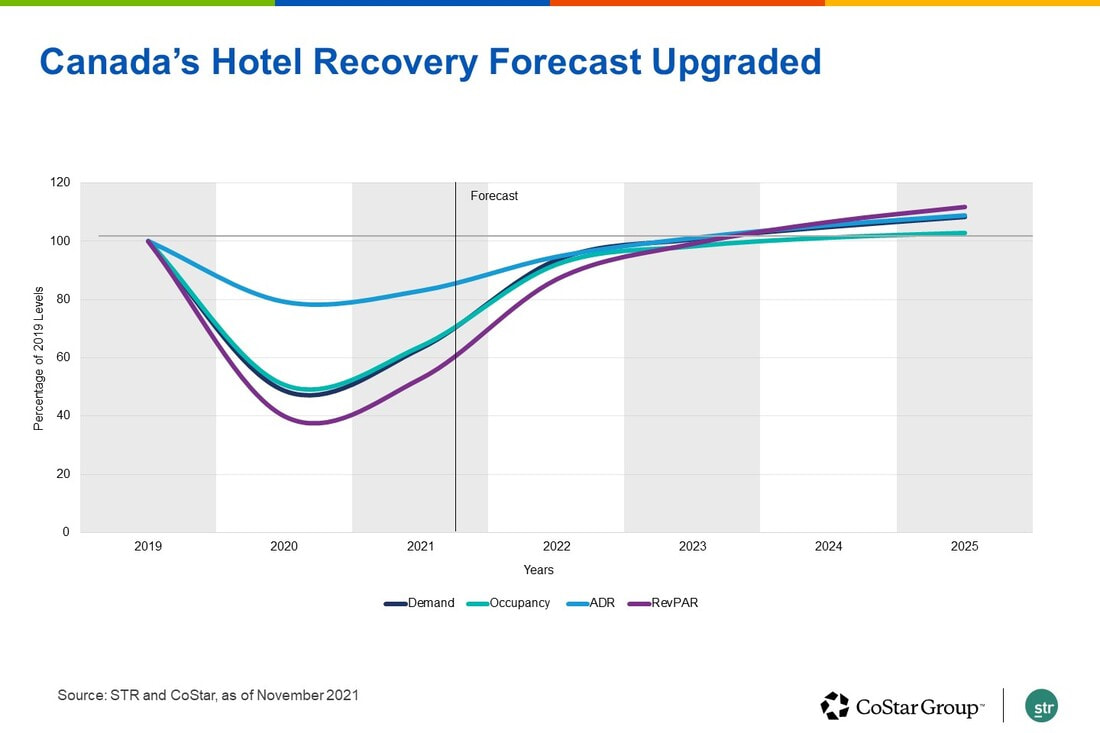 The most recent forecast for hotel operating metrics prepared by STR, CoStar Group's hospitality analytics firm, shows revenue per available room in Canada is forecast to come within a dollar of 2019 levels in 2023 and exceed 2019 levels by $7 in 2024.

The revision comes after a strong third quarter, when that indicator rose to two-thirds of levels achieved in the same time frame in 2019. The resurgence in travel activity has been supported by improved public health conditions, the broad availability of highly effective vaccines and one of the strongest double vaccination rates in the world.

This framework, alongside continued public health measures such as masking and vaccination passports, has largely allowed Canada to avoid a steep spike in case counts during the fourth wave and escape reinstating travel restrictions. The assumptions included in the forecast are based upon the recovery framework remaining consistent and a gradual improvement in public health conditions.

Although the outlook has been upgraded for both occupancy and average daily rate, the largest changes have been applied to ADR — now expected to exceed 2019 levels in 2023. Year-to-October, ADR has rebounded to 82% of the level during the same time frame in 2019, a stronger performance than what was previously predicted, and supports the upgrade in the forecast. The index continues to accelerate, landing at approximately 90% in October.
​ 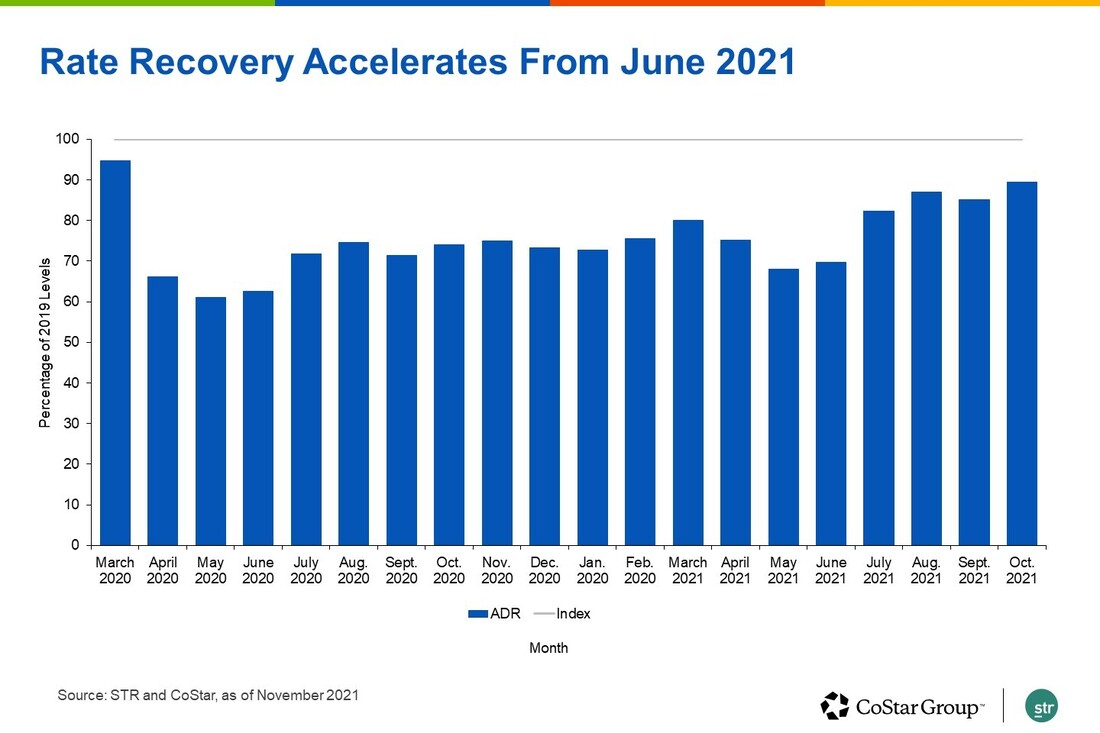 Meanwhile, occupancy is expected to exceed 2019 levels in 2024, meaning the recovery in Canada is expected to be led by ADR. This is a recovery pattern unique to the pandemic. In previous downturns, the recovery has followed the typical cyclical growth pattern, with improvements in occupancy leading the way, followed by ADR growth. There are various reasons that hoteliers have been able to keep rates strong and achieve significant growth, but skillful revenue management by Canadian hoteliers stands out.

ADR contracted far less than occupancy during the first year of the pandemic — down only 21% in 2020 compared to the 50% decline in occupancy. Lessons learned from previous recoveries, and the ability to quickly identify that this downturn was different, facilitated success. In the last downturn, hoteliers deployed a demand-led strategy, and the subsequent rate cutting that took place resulted in a 5% decline in ADR. It took four years for rates to return to 2008 levels.

Having experienced the negative impact of cutting rates and knowing this strategy would not generate demand in a pandemic, hoteliers have largely been able to avoid compromising rate integrity. The drop in ADR this time has mostly been a result of the shift in business mix, with higher-rated segments generating less demand and the essential demand that did produce some room nights being lower-rated.

Furthermore, due to the restrictions on travel and consumer hesitancy to travel, hoteliers also expected occupancy to be compromised over the course of the pandemic, so many have strategically pushed ADR to drive room revenue growth. With pent-up demand and savings, consumers have been less price sensitive to spend on travel. Consumers also have come to expect higher rates against the backdrop of high inflation experienced over the past seven months.

The labor shortage put downward pressure on occupancy, placing even more onus on driving revenue through ADR. Many hotels struggled to find enough staff to accommodate the pent-up demand, resulting in dirty rooms sitting empty overnight, putting a cap on occupancy. This was especially true over the summer, when hotels in Canada typically experience the strongest demand during its high season.

Hoteliers have also added focus on the bottom line after seeing a loss in 13 of the past 19 months, according to STR’s monthly profit-and-loss data. With inflation now running at an 18-year high, the cost of goods, energy and labor is adding margin pressure. To minimize cash burn and satisfy lenders, many hoteliers are using data-driven analysis to set ADR at a level that equates to achieving a profit, passing on some costs to the consumer.
​
All these strategies have led to stronger ADR recovery in this cycle compared to others and supported the upgrade in the national forecast. However, it is worth noting that when adjusted for inflation, real ADR and RevPAR are not forecast to return to 2019 levels until after 2025. There are also some downside risks. The pandemic is not over yet and deteriorating public health conditions could derail the recovery. However, what is certain is that at this stage, the recovery outlook is much more positive than it has been since the pandemic began, and hoteliers are proving themselves to be incredibly resilient.
​