HOTEL FF&E VENDOR
​Property owners are told they must live or die by their hotel star rating. The problem? Not all stars are created equal.

Some customers refuse to stay in a hotel that’s less than five stars. Star ratings can impact purchase decisions instantly. Just one extra star communicates something about your brand’s quality, luxury, and customer service. But a four-star hotel in Europe offers a dramatically different experience than a four-star hotel in the US; and herein lies the problem for hoteliers seeking to appeal to discerning guests.

How should you improve your star rating when there are so many different metrics, elements, and gradients that determine your review? There are some commonalities among hotel star rating systems that can help you narrow down where to focus your effort. Start with this guide to learn where you stand with stars – and how small changes at your property can have a big impact on your star rating.
Brief History and Background of the Five-Star System
Given the inconsistency of the star system around the world, it may not be a surprise that the five-star rating system used in the US didn’t originate from a member of the hospitality world. The five-star system was created by Mobil, an oil and gas company. Mobil employees traveling the country to service their gas stations and extraction sites started using a five-star system to rate hotels and make travel guides. The five-star system spread quickly, but even today, it continues to be unregulated.

You read that right: in the US, the hotel star rating system is based on popular opinion. However, European hotels use four stars, rather than the American five stars, to denote the quality of a hotel. To make matters more confusing, each country has its own methodology for regulating and defining hotel star ratings. “Consequently, three stars in England is not quite the same as three stars in Spain. Worse: three stars in Barcelona is not the same as three stars in Madrid or in Seville (each region of Spain adopts its own standards),” writes Travel + Leisure.
What Does Each Level of Hotel Stars Actually Mean?
There’s no straightforward answer to defining each star rating explicitly. The US and other countries use completely different approaches to assigning stars; the problem is further compounded by each individual rating system’s definition of “quality.”

That said, there are some general guidelines consumers and property managers should understand. First, hotel star systems measure the quality of property’s facilities: not the experience. This is critical for property managers to understand. As great as your front desk service may be, a cheerful greeting at check-in won’t change your star rating. Hotels with more stars have more facilities, such as large rooms, swimming pools, jacuzzis, and bathtubs.

Each star rating will vary depending on who is doing the rating. Some countries are more prescriptive than others; likewise, different OTAs will have different criteria for what qualifies for a certain star rating. That said, there are some generalities that hotel owners can use to measure their relative position:
​Amenities and facilities take a starring role (no pun intended) in achieving a higher rating. But, it’s also important to recognize some of the nuances built into OTA star ratings and the differences between countries to best assess where to spend your budget.
Hotel Stars Mean Different Things Depending on Who You Ask
Countries all have different approaches to how a hotel earns its star rating. Even within a country, ratings can vary by city or regional regulations.

In France, the US, Germany, and the United Kingdom, how a hotel is classified is voluntary. France, for instance, allows private organizations to provide a star rating (authorized by Cofrac, the French Accreditation Committee). Other European countries, including Germany, use the HotelStars Union, which is a trade association for hotels and restaurants. The US uses AAA and Forbes Stars.

But, in Italy, Spain, and Greece, the responsibility for providing a star rating falls to regional governments. Each region within Spain, for instance, will pass legislation that precisely describes the characteristics and minimum requirements each hotel must have to earn that level of stars. Public inspectors visit each property to make sure the hotel is complying with the rules assigned to each category.

Travelers are rarely cognizant of the difference between a star rating assigned by a government inspector, one by a trade organization, or one assigned by fellow travelers on an online travel agency. Even among OTAs, there’s a distinct difference in how stars are assigned. Here’s a good example of how star ratings differ by platform. 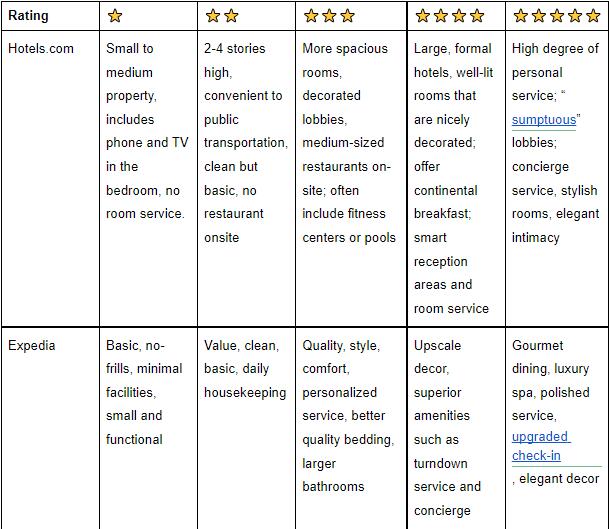 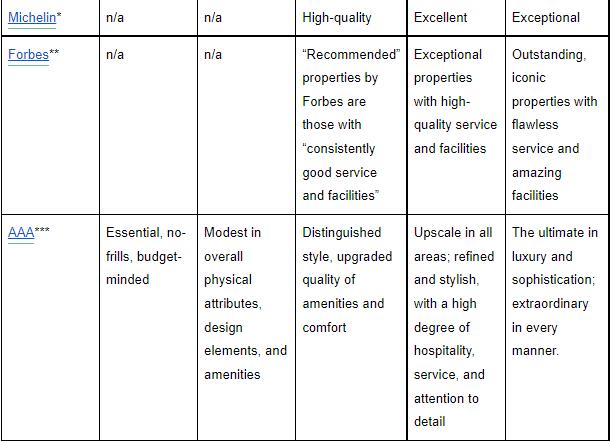 ​*Michelin previously served as a reliable benchmark for discerning travelers, but the brand has since narrowed its focus to restaurants and bars. Their infamous three-star rating system is now managed by a partner called Tablet.

**Forbes offers a subscription-based guide that grew directly from the original Mobil travel ratings. The team uses a checklist of 800 items to determine its star rating; they mostly focus on four and five-star properties, meaning they seek to verify luxury rather than to provide an objective review.

***AAA doesn’t limit their ratings to upscale properties, but they do use a 33-point checklist, similar to Forbes’ approach. Pre-approved properties are evaluated based on member feedback and full-time, professional evaluators. Instead of using stars, AAA rewards “diamonds”; a three-diamond property must offer televisions in every room and a swimming pool, for instance.

Clearly, each platform factors different elements into their rating system. Some include guest experience metrics, such as customer service (Hotels.com) while others stay focused on amenities (Expedia). A strategy that tries to earn your property five stars on one platform may still have you falling short on another.
Tech Won’t Earn Your Hotel Stars But It Certainly Helps
Bottom line? Focus on providing great amenities, awesome customer service, and keeping your property up-to-date. Technology can’t directly earn you more stars from a rating agency, but it can impact your guest experience – and at the end of the day, that’s what matters. Implementing a keyless entry solution, such as the popular ASSA ABLOY Global Solutions Keyless Entry, demonstrates that you’re willing to invest in service and create a better experience.

Case in point: Four Seasons Boston. The new property at One Dalton Street is a modern, 61-story skyscraper that features ASSA ABLOY custom-designed VingCard Essence door locks alongside VingCard Signature RFID locks. Details matter at this five-star property: the sleek, state-of-the-art security and access system matches the building’s design. With all electronic components encased within the door itself and only a sleek RFID/BLE reader visible to guests, VingCard Essence can circumvent the unmistakably commercial and bulky appearance of traditional hospitality-based door locks.

Details like VingCard aren’t just fashionable – ASSA ABLOY keyless entry is also functional. VingCard Essence is equipped with the highest standard in security encryption protocols to protect against the risk of unauthorized access. VingCard Essence locks can be configured for mobile access, meaning that a hotel can elect to allow guests to unlock their room with a personal device – without the need to replace existing hardware. Likewise, the VingCard Essence can be configured to access guest room thermostats, helping achieve energy management goals by allowing your property to adjust temperatures when needed.

Review experts are guests as much as they are critics. They are influenced by hotel technology and personal details as much as any other guests; smart hotel tech can indirectly impact star ratings when deployed thoughtfully and strategically.